This post will detail a closed form solution to split polygons into any number of equal areas, while ensuring minimum length of line based cuts. The solution works for both convex and concave polygons, as long as they don’t have non-manifold vertices, and can be traversed with a single loop. Credit for this concept goes to Dr. Rossignac, who also introduced me to the power of medial axis.

Base Case: 4-Sided Polygon
Let’s start with a 4-sided polygon, and say we need to split this into N sub-polygons. We use the divide and conquer methodology:

The problem of splitting polygon N-ways has now been reduced to splitting polygon into two sub-polygon with specific area. Since the cut is a line, it would start from one edge and end at another. There are six possible edge pairs in a 4-sided polygon, that could lead to a potential cut. Three of these cuts – C1, C2, C3 are shown in the images below as a reference. We can select the minimum cut from the all potential cuts obtained from each edge pair.

Now, the problem is reduced to making a cut on a given edge pair, such that the cut splits the polygon into two sub-polygons of specific area.

Splitting Polygon For a Given Edge Pair
Say, we select edges AD, and BC in the 4-sided polygon shown below.

Key Concept
For a given edge pair, the minimum cut line within a trapezoid, must lie perpendicular to the angle-bisector of the two edges in the edge-pair. While this makes sense intuitively, it can also be geometrically proved by creating a trapezoid where the parallel edges lie at an angle \alpha to the angle-bisector. The area of this trapezoid can be expressed as a function of \alpha. For the cut line to be minimum, we take the derivative of the area, and it can be shown, that for a given area, \alpha must be equal to 90^{\circ}

General Case: Splitting N-Sided Polygon
So far, we have shown, how to determine the minimum cut line for a given edge pair. We can easily extend this for any N-sided polygon 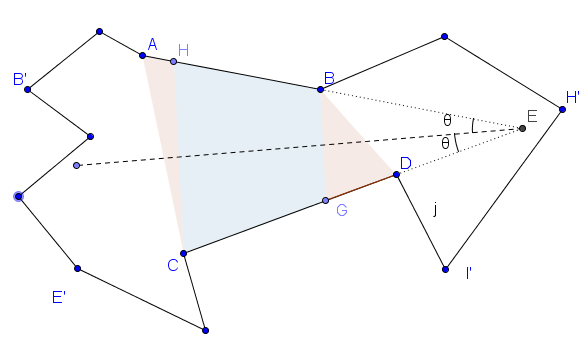 Time Complexity
Say, we want to split a 4-sided polygon into 4 sub-polygons. We start by splitting the polygon into two pieces one with {1/4}^{th} area, and another one with {3/4}^{th} area. The same process would then be repeated on the bigger sub-polygon till all sub-polygons are of target area. At each step of splitting into two sub-polygons, there are several possible edge pairs. For example, in the very first step, the 4-sided polygon has 6 possible edge pairs, and therefore 6 possible split lines. Each of these splits would lead to its own tree of final solution. Therefore we have two possible approaches:

Implementation
The recursive approach as outlined above was implemented via processing. The video demo below shows how the split lines change in real time as polygon coordinates or number of required splits is modified.

I write about my experiments in technology, personal growth, and healthy living hoping that someday I will be able to look back at them and connect the dots. Here's a more official take on me.